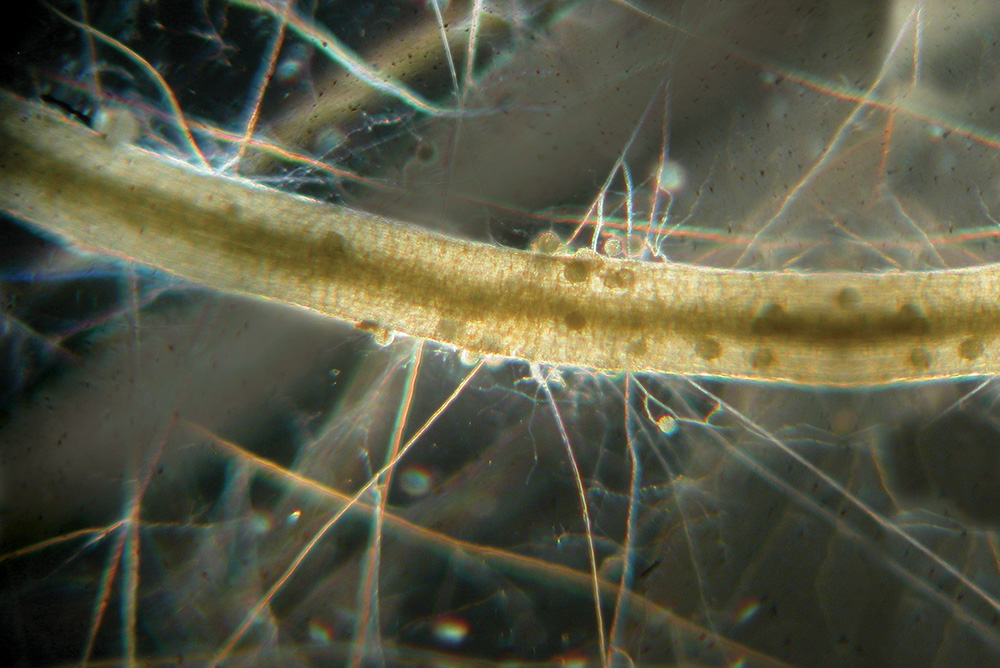 How glucosinolates (GSLs) benefit canola to the detriment of the following crop.

A recent blog we posted has generated a great deal of interest among canola growers. In it, we revealed that a defensive mechanism common to brassicas protects canola against soilborne disease, yet works to the detriment of the following crop.

Today, we take a closer look at how glucosinolates (GSLs) work and their impact on soil biology – including beneficial microbes.

Research conducted over the past decade has shown how glucosinolates (GSLs) can provide canola and other brassica plants resistance against pest and disease.

Glucosinolates are an example of a phytochemical that attacks biological pathogens in the soil, preventing harm to the canola plant. Many plants produce phytochemical molecules, which protect against disease, but offer the plant no nutritional value.

There are several types of GSLs. They are made up of nitrogen and sulfur metabolites and are toxic to many soilborne organisms due to their antibiotic effect.[1]

This ability to defend against harmful bacteria is of great benefit to the canola crop. Unfortunately, “friendly” microbes (including beneficial fungi such as arbuscular mycorrhizae) get caught in the crossfire.

This is not considered a big deal for the canola, because brassica plants do not form symbiotic bonds with mycorrhizae. However, it does make a difference to the crop seeded into canola stubble: especially if the plan is to grow corn, legumes, beans, flax or potatoes.

Mycorrhizae create filaments (hyphae) that serve to extend a plant’s root system and aid the uptake of phosphorus and other nutrients. These hyphae are much finer than roots, and can enter parts of the soil roots cannot. In addition, the hyphae have a higher surface to volume ratio than roots – meaning they have greater absorptive ability. Since phosphorus is not very mobile in the soil, the hyphae provide a huge advantage to the plant.

A 2005 study comparing 290 published field studies revealed an average yield increase of 23% in crops colonized by arbuscular mycorrhizae. Another earlier comparison of 78 studies put that figure at 37%.[2]

Arbuscular mycorrhizae populations in the soil are severely reduced following canola, due to these GSLs. The levels do not return to normal for up to 62 days after seeding – unless mycorrhizae are introduced back into the soil through a biological inoculant.

Why do the GSLs continue to affect soil microbes after the canola harvest?

This is a question that has intrigued scientists. It appears the GSLs that target arbuscular mycorrhizae are concentrated in the roots of the canola plant.

The effect on the following crop could be explained by the fact that canola seedlings have many small roots with a large surface area. These roots remain in the ground, even after harvest, and will continue to have a negative impact on the mycorrhizae. Volunteer canola has been identified as another source of GSLs that suppress growth and can’t be ignored.[3]

Just as we replace depleted nutrients consumed by the previous crop to ensure the success of the incoming crop, we are now beginning to understand the value of replenishing key biologicals. Nowhere is the need greater than in canola stubble.

Waiting two months for the mycorrhizae to naturally return is too late, as phosphorus is necessary for protein synthesis, cell division and energy conversions: which are all crucial at the early growth stage.

So how do you overcome the canola conundrum?

Adding an inoculant containing mycorrhizae at seeding following a canola crop will reinvigorate the soil, and benefit the plant immediately after germination. These benefits will extend throughout the growing season.