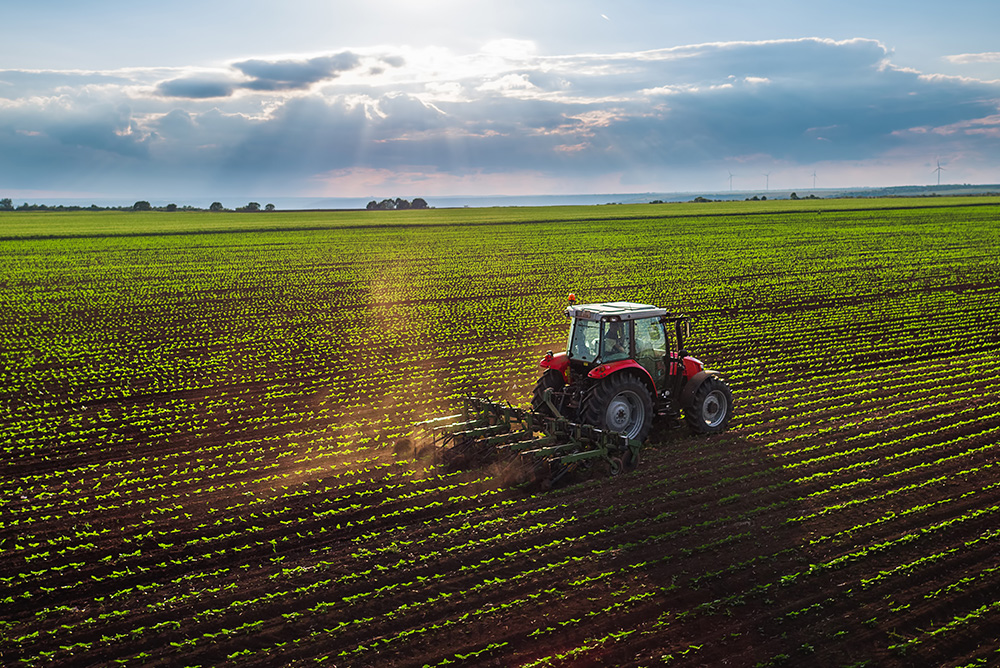 Phosphorus is essential to the survival of every living organism on our planet. Yet Phosphorus is a major challenge for North American cities – and for Canadian growers – for two vastly different reasons.

For cities, it is a nuisance mineral that must be removed from the wastewater treatment, or risk causing algae blooms when released back into waterways. For growers, who rely on this vital crop nutrient, the Phosphorus contained in common fertilizers can often become tied-up in high and low-pH soils, and never reach the plant.

An innovative new made-in-Canada approach is providing a simple yet elegant solution to both concerns and has the potential to reshape modern practices around farming and municipal water treatment.

Ostara Nutrient Recovery Technologies is using a patented technology to extract a pure source of Phosphorus called struvite during the final stages of the municipal wastewater treatment process. It is using technology first developed at the University of British Columbia in 1999.

Sold under the trade name of Crystal Green®, and distributed in Canada by Taurus Agricultural Marketing, this highly concentrated form of Phosphorus can be blended with MAP or DAP for a safer, more reliable, longer lasting, more readily available commercial Phosphorus source in high and low pH soils.

According to Craig Davidson, President of Taurus, chemists have known about struvite (magnesium ammonium phosphate hexa-hydrate) for over a century. Ostara was the first to realize its potential as an agricultural fertilizer.

“Because it doesn’t get tied up with minerals in low or high pH soils, Crystal Green is unique among Phosphorus fertilizers. Nearly two-thirds of Canadian prairie farmland fall into this pH category, so it’s not an isolated problem,” Davidson says. 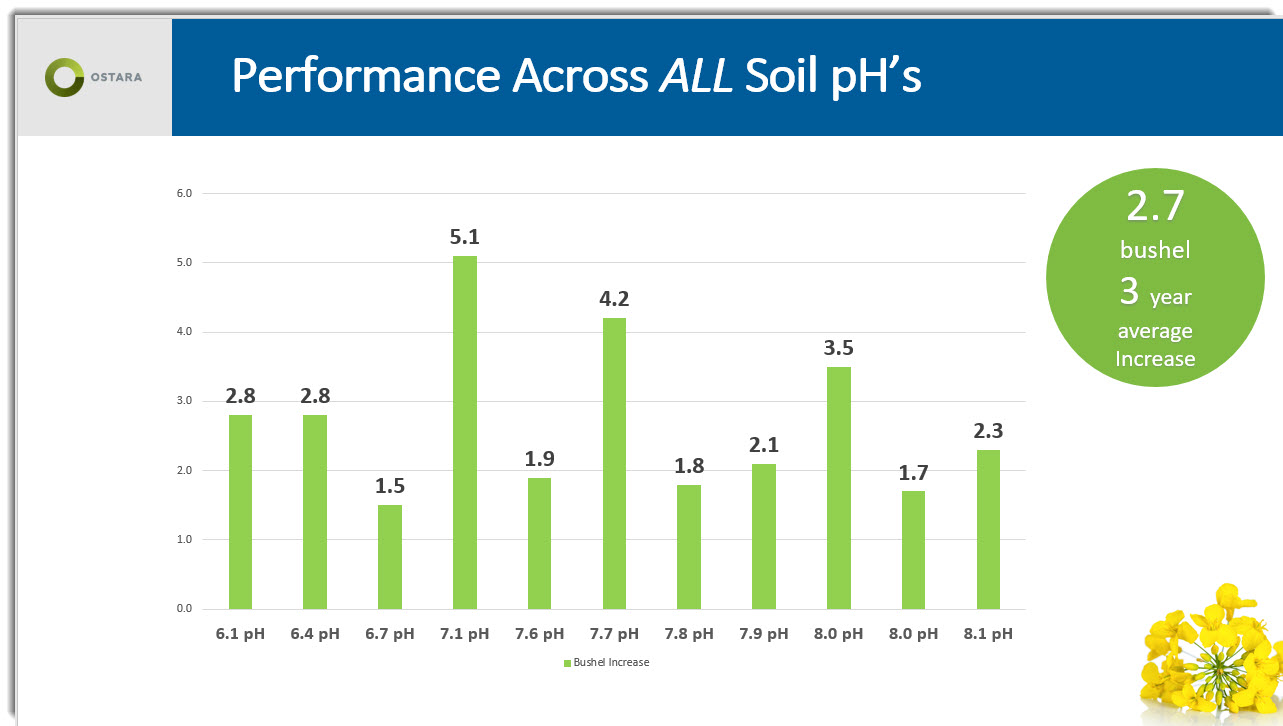 MAP and DAP provide optimum performance in soils with a pH between 6.0 and 7.0. When applied in high pH (basic) soils, the Phosphorus from these fertilizers tends to bind with Calcium. In low pH (acidic) soils, it binds with Iron and Aluminum molecules. In both instances, this ties up the Phosphorus and restricts its availability to the plants.

With struvite, the Phosphate is already bonded to Magnesium, preventing it from becoming tied up with Calcium, Iron or Aluminum. This bond is readily broken when the plant demands Phosphate. It also ensures the Phosphorus remains accessible in the soil throughout the growing season.

In 2017, North Dakota State University cereals extension agronomist, Joel Ransom, conducted phosphate placement trials after harvest over an eight-month period through to the following spring. Hundreds of sample bags with MAP, DAP and Crystal Green were buried at five depths in a high pH soil. Across all depths, only 5% to 18% of the MAP was recovered or left available for plants to use the following season, while 94% to 98% of the Crystal Green was recovered and still usable by plants the following spring.

Another advantage of struvite is that it is plant-activated, and does not require moisture or precipitation to convert to Phosphate, unlike MAP and DAP, which are water soluble.

Crystal Green, for example, is 96% citrate soluble. Citrates are organic acids that are released from the roots when the plant requires phosphate. A single application will provide an on-demand source of phosphate throughout the growing season.

“Phosphorus is required at various key growth stages. Timely access to Phosphorus is critical to healthy plant growth. Like all major nutrients, a Phosphorus deficiency will have a noticeable impact on yields,”  Davidson says.

Seed safety has long been a concern with MAP and DAP fertilizers due to their high salt index. Crystal Green has a salt index of 7.7,  70-75% lower than  MAP or DAP. This is a big advantage since Phosphorus is not mobile in the soil, although banding is necessary if it is blended with MAP or DAP.

Initial canola studies conducted by a Manitoba retailer and the University of Manitoba showed that a blend with 25% Crystal Green and 75% MAP provided a higher stand count than a standard grower treatment (involving MAP and other widely used Phosphorus products). Where the Crystal Green blend was used, there were 11.4 more plants/square metre. This resulted in an average yield increase of 3.05 bu/acre. 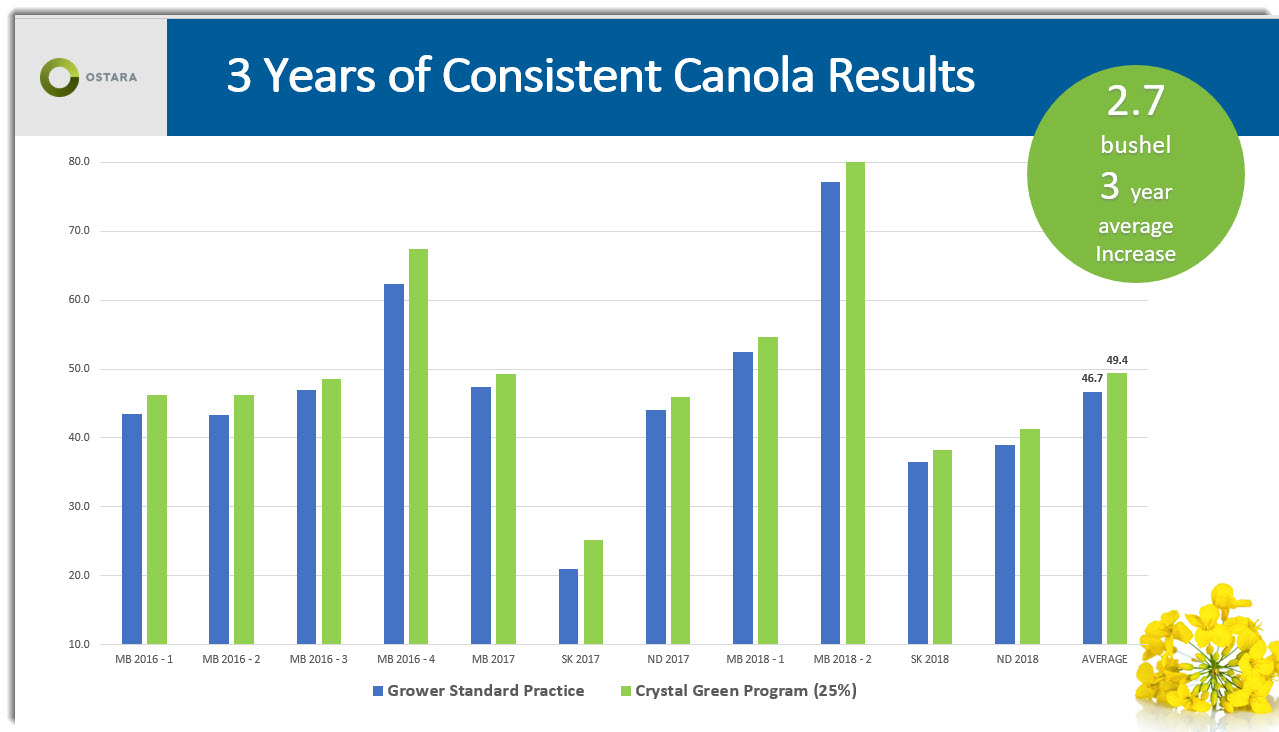 The science behind Crystal Green as an agricultural fertilizer has been in development for more than a decade. Over the past seven years alone, Ostara has worked with 35 researchers, conducting over 150 trials in 26 different crops.

Canola trials with Crystal Green, DAP and MAP have been conducted in Manitoba and North Dakota. Manitoba trials showed 20% more plants per acre and a yield increase of 3.9 bushels per acre where a blend of Crystal Green was used.

A Complement to MAP and DAP.

Crystal Green is meant to be a complement to MAP and DAP fertilizers as a blend in high or low pH soils. In field application, Ostara recommends replacing 25 percent of the phosphate package with Crystal Green if the soil pH balance is less than 6.4 pH or more than 7.3 pH. It is registered for agricultural use in the United States, Canada and the European Union.

Crystal Green will be available for the 2019 growing season and will be sold through retailers across Manitoba, Saskatchewan and Alberta.

Craig Davidson sees huge potential for this fertilizer due to its agronomic and economic fit in Canada’s lower and higher pH soils, for its enhanced seed safety, for season-long feeding where the plant is in control and for its positive impact on the environment.

“For today’s advanced growers we continue to look to bring innovative solutions that can offer them increased yields and better returns. When that innovation is also part of a movement that is cleaning up the earth, it provides growers a stronger voice and a better chance to connect with today’s informed consumers,” Davidson says.

“Mark my words, Crystal Green will become a common part of advanced grower programs in the coming years – and the world will be a better place for it!

Currently, Edmonton and Saskatoon are among 11 North American cities using Ostara’s technology to remove phosphate from their wastewater (with another site planned for Winnipeg). By reselling this agricultural-grade struvite as Crystal Green, Ostara is providing a safe and readily plant-available source of Phosphorus for high and low pH soils. It is a win-win situation for farmers and municipalities. Not to mention the environment. 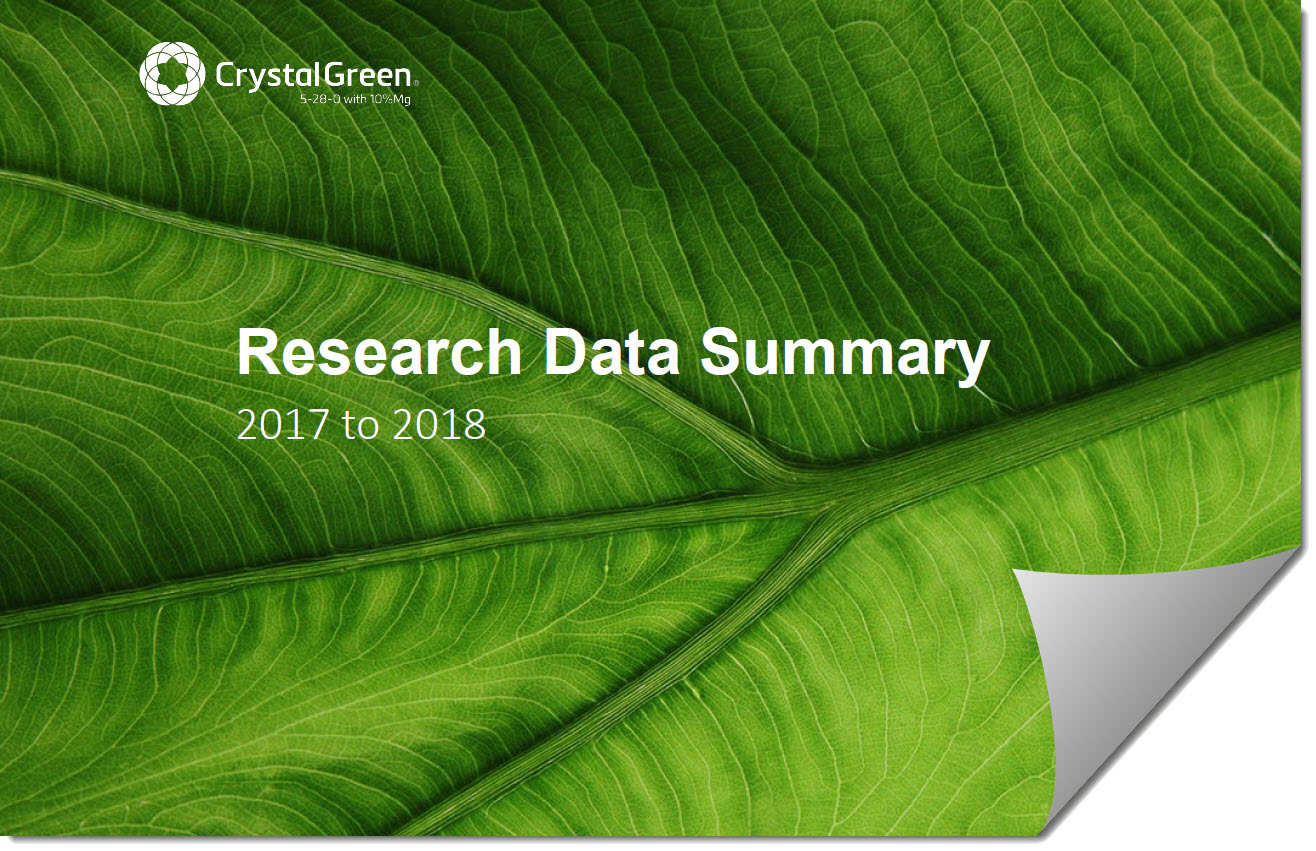